EPUB+WEB: A Convergence in Offline and Online Reading 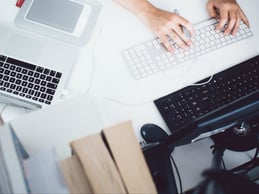 One of the discussion topics at the IDPF conference at this year’s BEA event pertained to the notion of a format that allows for integrated online and offline reading – a convergence of web and EPUB. In a subsequent whitepaper written by leading experts Marcus Gylling (IDPF CTO) and Ivan Herman (W3C Lead for Digital Publishing), the notion and potential benefits of such a development were discussed. In an interview with EPUBZONE, Gylling described the discussion as “mainly a stake in the ground for a vision many of us share of an optimal future for online and offline digital publishing in which portable documents and Web content are converged into a single technology stack.” The intention is ultimately to take EPUB to the next level, creating the ideal portable document format for modern consumers.

In this blog post, we will look at some of the key ideas discussed, the potential underlying benefits, and some of the possible issues or considerations that may arise should this situation come to pass.

EPUB+WEB is a term that was coined to define the future vision of a fully native representation of documents within the Open Web Platform (a collection of web-based technologies developed by the World Wide Web Consortium). The discussion around this potential development is in the early phases and so this term is being used in the interim. Ultimately, EPUB+WEB is intended to combine online and offline (i.e. EPUB or portable document publishing) into one interchangeable format, which would allow readers to switch from one to the other. This would mean that users who are reading content online, and therefore enjoying the benefits of external links and interactive elements, can continue to read the content and make annotations and other changes when in an offline mode. Once back online, those amendments would then be pulled into the offline version seamlessly so that there was no change in the user experience.

One of the primary arguments presented for moving toward this sort of dynamic format is to reduce the workflow separation that currently exists for publishers in producing the same content for both online (web) and portable (EPUB) streams. This effectively means that content produced for either mode can still be accessible regardless of the mode in which the reader initially accesses the content. For this to work seamlessly, the features inherent in both user modes should flow from one to the other. Examples of such features might include referencing and annotations, or access to external sites or resources.

Essentially, an EPUB format is a package of different content elements presented in one file – from chapters to images, text and tables or other interactive elements such as video and audio. The file is compiled with all of these elements to ensure that the reader experience is not interrupted regardless of whether they are online or offline. While there are many similarities in terms of the actual reading experience for users, the ability to download and immediately access related or linked content from a web page is one of the primary benefits that cannot currently be enjoyed in an offline environment. Already with EPUB3, we can see a move toward interactive content that mirrors some of the capability allowed through the web, particularly in the case of educational publishing.

While there are key differences in the way in which content via both streams is consumed, the fundamental difference is that EPUB is a packaged format, while web is not. Furthermore, there are significant differences in how content is controlled and displayed on via the two formats. Content on an EPUB file, while paginated, is flowable so that users can control font size and style to suit their needs, without inherently changing the presentation of the content. On the web, content display is entirely controlled by the developer, who determines layout, font and size, with the user able only to zoom in and out. Additionally, website content is not defined by pages in the way that books are (even in digital form) and so there would need to be some way to marry the two formats more closely in this aspect.

Ideally, such solutions would be worked out to allow the seamless combination of the two modes which, in addition to improving publisher workflow, would be a valuable improvement. In order to achieve this, publishers would need to present a more active voice in the development of new web standards and development to ensure that their needs are being met, and to move closer to a point where a convergence between EPUB and web becomes possible.

The general landscape of publishing is changing, with the traditional definition of a publisher rapidly evolving to include all manner of media producers and, in particular, tech companies focused on developing new modes of reading and content consumption. One of the main points presented in the paper was the need for a greater level of communication and marriage of ideas between technology companies and/or web developers and traditional book publishers. On each end of the spectrum there is a very distinct set of knowledge and experience, and an inherent lack of knowledge about the other end. By sharing ideas and knowledge in this way, there could be a distinct improvement in publishing workflows and a reduction in the duplication of time, money and effort on both ends to meet the needs of the modern consumer.

Essentially, the goal is to blur the lines between content consumption in the form of a book and a web application, given that readers are constantly alternating between the two, and that such an enormous amount of time is spent engaging with content online, whether in the form of news sites, blogs, or other media. Hypothetically, this means that a reader who came across an article online while on the train could continue to read and edit that content even as his internet connection dropped out. Then upon regaining access to the internet, the reader would see any amendments or annotations automatically synchronised with the online version of the content.

In order to implement a convergence between EPUB and OWP, there are many considerations which would need to be looked at. Beyond the need for greater communication and knowledge sharing between the publishing and technical industries, there is the need for a widespread adoption of suitable technologies.

One of the main challenges the industry faced during the early transition to EPUB was the way in which the file was contained, particularly in relation to proprietary formats. There were several issues in terms of specific methods for opening and viewing the content, this being possible, in some instances, only by using certain programs. Now, with the widely spread adoption and acceptance of EPUB as an industry standard format, these issues have for the most part been successfully navigated. The question then arises as to whether a similar situation may arise with this new concept. Will compatibility be an issue in terms of how an EPUB+WEB file would open and work? Would it be defined by its host?

In the interview with EPUBZONE, Tzviya Siegman, (Wiley’s Digital Book Standards & Capabilities Lead and co-chair of the W3C Digital Publishing Interest Group) highlighted concerns over the backward compatibility of any new iteration of EPUB, describing the need for future-proofing content while embracing forward-facing technologies as a balancing act. “So if to more fully achieve the EPUB-WEB vision we end up sacrificing backwards compatibility, we’ll need to ensure that we realize enough concrete benefits to make the pain and suffering of migration worthwhile.”

There are differing standards that apply to both web and EPUB, so to enjoy a fully compatible mix of the two, it would be vital to ensure that all parties are able to establish a new set of standards that meet the unique requirements of a format that combines elements from both.

The reality is that at this stage the notion of EPUB+WEB is an idea, a prospect that developers and publishers can work together to move toward in order to achieve an ideal merger between offline and online reading environments. There are innumerable factors involved, many of which have been highlighted above and further in the whitepaper, which would need to be addressed, most notably the issue of compatibility, before such a vision can be realised. However, by drawing closer to a convergence between offline and online reading modes, publishers have a greater opportunity for streamlining the production workflow required for the differing formats.